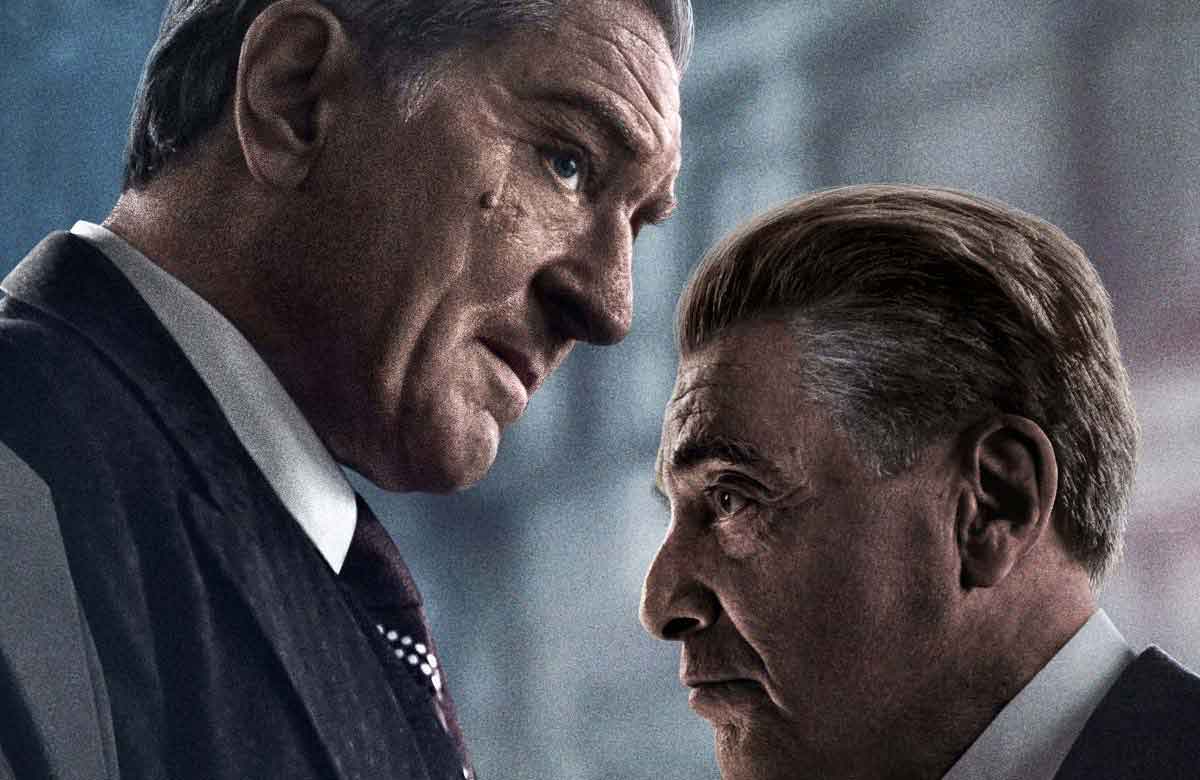 One of the biggest mysteries of the 20th Century was the disappearance of Jimmy Hoffa. In 2019, this story was brought to film by Martin Scorcese. It combined history’s best screen talent, the biggest streaming service, and very expensive special effects. In this post, we share some thoughts on, and try not to spoil, The Irishman.

The Irishman tells the life story of Frank Sheeran, organized crime figure and close confidant of Teamsters President, Jimmy Hoffa. It’s based on the book, I Heard You Paint Houses by Charles Brandt. It brings together the most iconic and prolific actors of our time, including: Robert De Niro (Frank “The Irishman” Sheeran), Joe Pesci (Russell Bufalino), Al Pacino (Jimmy Hoffa), and Harvey Keitel (Angelo Bruno). It also contains a strong supporting cast of some of my favorite actors, including Ray Romano (Paddleton, Get Shorty), Bobby Cannavale (Vinyl, The Station Agent), Stephen Graham (Boardwalk Empire, Snatch) and Jesse Plemons (Breaking Bad, Game Night).

What’s The Irishman about?

Frank Sheeran was as an average Philly truck driver. After being introduced to the Bufalino crime family, he ascended to national politics, gaining the confidence of Jimmy Hoffa. Hoffa, the second most powerful man in the United States at the time, famously disappeared in 1975. In a hurricane feud that involved the mob, Kennedy family, Castro, Nixon and a giant pension fund, The Irishman details Frank Sheeran’s account of what allegedly happened.

The performances were fantastic all around. Unlike many of his other roles, De Niro doesn’t play a menacing boss. He’s quite demure as the family man turned house painter. He is a joy to watch, quietly moving from task to task as a mob ambassador of sorts. At the same time, he shines when he muscles people around. It’s truly surprising that he didn’t receive a Best Actor Golden Globe nom. (Fun Fact: of the five films nominated for Best Picture Globes, De Niro’s in two of them.)

In Joe Pesci’s words, Bob and Marty “pulled him out of the gutter” to work on The Irishman. And it was a good thing for all involved. As the powerful yet subdued mob boss, Russell Bufalino, Pesci somehow delivers authority, calm, fear and terror all at once. He earned a 2020 Golden Globe nod for his portrayal.

As did Al Pacino. Some said that Jimmy Hoffa was an easier role to play, since there was so much footage of him. But one could argue it made the role more difficult for the same reason. In addition to his Chicagoan accent, you get a classic Pacino performance: boisterous, kind, and unwavering.

Of course, Scorcese was as masterful as always. Not only did he reunite this amazing group, but coaxed incredible performances out of them. We were treated to classic Scorcese staples: the opening scene, reminiscent of the Goodfellas steadi-cam shot; quick camera reveals; first-person narration; and of course, that midcentury-flavored soundtrack.

Impressions of the “de-aging” technology

One of the first things you notice is the CGI effect that made the principal actors look young. Makeup also aged actors past their present-day appearances. This helped increase the impact of their youthful shots. As the central figure in the story, Frank Sheeran ages the most:

What I love about the effects is that they allow the actor to still express the emotions and subtext that they would normally. But of course, they aren’t perfect. With well-known actors like De Niro, we may compare the altered appearance with how we remember the actor from earlier films. For example, here’s a shot of De Niro as a young man in The Irishman, and an actual young man in 1976’s Taxi Driver:

Observation #1: De Niro sure drives a lot. (Ronin, anyone?) But secondly, the CGI effect does not change face width, jawline, or other features that signal age. While it does change eye color, the blue hue in De Niro’s eyes were artificial and distracting. But hey, whaddya gonna do. He’s playing an Irishman.

There’s also the matter of how an actor moves within a scene. De Niro walks, runs, and fights in this film, but the software can do nothing to mask his movements. In that sense, a scene may not look as authentic when, say, a 76-year-old beats the living daylight out of a handsy grocer. But the effect can be extremely successful within the boundaries of a single film, depending on the actor, scene, and his or her movements.

For some, like Joe Pesci, the effects worked well. This may be due to Pesci’s face shape, or more spread out time periods, but overall his aging looked pretty darn good.

Even with its 209 runtime, this movie is a must see for fans of film. It’s another phenomenal achievement by Netflix, who last year brought us the Best-Picture-nominated, critically acclaimed, Roma. Yes, there’s been considerable blowback for even making The Irishman. (Some have called it Sheeran’s desperate money grab, made of pure fiction.) In the 23-minute companion video, The Irishman in Conversation, Scorcese himself says, “Who knows what the real story is?”

So take it with a grain of salt, and enjoy a movie that wasn’t made for children or China. With the principals’ average age falling at 77, this may be the last time we see a collaboration like this again.