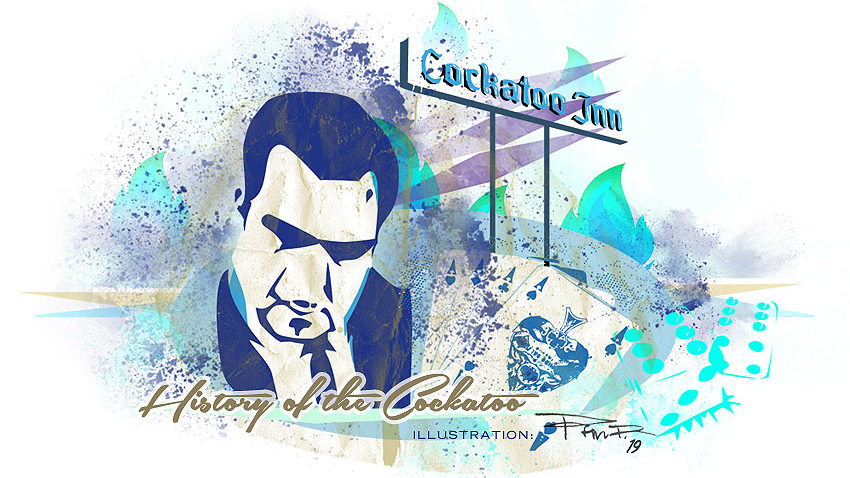 The history of the Cockatoo is set against the backdrop of a fast-growing Los Angeles. Population in Los Angeles County spiked from 170K in 1900 to 2.2M by 1930. Tumultuous times saw a stock market crash that closed the lid on the roaring twenties. After Prohibition and The Great Depression, the world was at war once again. As the movie industry transformed Hollywood into a worldwide beacon of American culture,  money and fame attracted opportunists from dark corners.

Powerful mafia figure Bugsy Siegel relocated to LA from New York. While he made his way into Hollywood circles, his henchman, Mickey Cohen, feuded with Jack Dragna, a major head of Southern California organized crime. Gambling was a major component of their activities. Corruption within the system – that is, law enforcement and government officials – ran rampant. This was LA.

Before the Cockatoo Inn we knew was established, a small place called the Cockatoo Cafe sat in its place. History surrounding its founding are unknown. However, there are records that show it was described as a “dingy” place in the 1940s, known for being an illegal bookie joint. It was owned by three men, one of whom was a Los Angeles police detective. In a later FBI interview, known mafia associate Andrew J. Lococo admitted to being a bookie and profiting from gambling activities at the Cockatoo Cafe.

Eventually, Andy purchased a stake in it around 1946 (some documents also state 1948). It wasn’t long before the three co-owners were out of the picture. Andy had full control of what was simply known as, “the Cockatoo”.

In September 1949, the Los Angeles Sheriff’s Office swept the Cockatoo in a gambling raid. Andy was arrested on gambling charges, but they were later dropped. Soon after, these matters fell under the City of Hawthorne’s jurisdiction. With the heat off of Andy, the Cockatoo flourished.

In 1958, Andy contended with a different kind of heat when a fire destroyed the restaurant. However, it would be a blessing in disguise, as it allowed Andy Lococo to expand and relaunch the business.

The newer, grander Cockatoo Inn was built in “Olde English style”.  It was located at 4334 West Imperial Highway at Hawthorne Boulevard, south of I-105. Over the years, it was also listed as being in Inglewood.

The 1960s saw increased success at the Cockatoo. According to the LA Times, famous celebrities like Mickey Rooney and Betty Grable were known to visit. It also garnered attention from John F. Kennedy, Richard Nixon, and Hawhtorne native, Marilyn Monroe. It was a meeting place for many in the community. It also left indelible impressions on those from outside the area. The Cockatoo was also a known hub for horse racing insiders, gamblers, city officials, and defense contractors. It was very much a success while under Lococo control.

Over the years, authorities spent considerable attention on Andy Lococo’s activities. The FBI tracked his movements for several years, including his fishing trips to Baja, California. Finally, the law caught up with him. In June of 1969, Lococo was convicted of perjury (United States v. Andrew J. Lococo, 450 F.2d 1196 (9th Cir. 1972). The charge was related to the question of whether he had a phone call with convicted bookmaker, Ray Mirr. The judge sentenced Lococo to five years probation on the condition he serve six-months jail time. He was also fined $2,000 plus legal fees. He passed away in 1973 of a stroke, at the age of 55.

After his death, the Cockatoo Inn changed hands a number of times. It struggled with socioeconomic changes happening throughout the country. As corporations consolidated through the 1980s and 1990s, independent, mid-century hotels like the Cockatoo faded from the American landscape.

According to a former employee, the owner of the Hacienda Hotels also owned the Cockatoo in 1984. Documents show that they owned a number of other hotels and restaurants in the area as well. We later uncovered that this owner was Les Freres Corporation, which also went by the name Les Freres Hacienda. The famed attorney, Myron Harpole, presided as President during this time. Some of the partners who were associated with his other corporations also worked at the Cockatoo Inn at some capacity.

On December 10, 1984, a notable incident occurred at the Cockatoo Inn. A Northrop engineer named Thomas Cavanagh tried to sell American secrets to individuals he thought were KGB.

LA County Supervisor Kenneth Hahn, who served for 40 years and helped shaped Los Angeles, held a campaign brunch at the Cockatoo Inn in 1988. Muhammad Ali was in attendance.

In 1991, the Hawthorne area suffered another blow, when toy-maker Mattel left its home of 44 years.

Soon after in 1993, the Cockatoo Inn secured a government contract to house military recruits. Alas, it wasn’t enough fill the vacancies. A sharp decline in aerospace jobs exacerbated its declining occupancy rate. The last owners, California Hotels Corp, decided to close it on December 22, 1994.

On January 6, 1995, the Cockatoo was reopened by Chinese investors. It was purchased through a township and village enterprise, or TVE.  When TVEs fell out of favor in the 1990s, many went bankrupt. Some were expropriated by the government. It is believed these issues helped seal the Cockatoo Inn’s fate for good.

In 1996, director Quentin Tarantino shot scenes at the Cockatoo for his 1997 film, Jackie Brown, starring Pam Grier and Samuel L. Jackson. According to IMDB, it was the only feature film to include the Cockatoo Inn. The building sat abandoned through the rest of the late 1990s. Finally, it was demolished in 2005.

Today, the old Cockatoo Inn site is surrounded by a Candlewood Suites and a Valero gas station. A few yards down Acacia Avenue, a Comfort Inn uses the name “Cockatoo” to lure those who once knew this great place. Sadly, invoking the name won’t bring back its predecessor’s panache.

In 2016, seeing that a website had never been established for the Cockatoo Inn, we started CockatooInn.com in order to document some of the history surrounding the storied inn and its former owner, Andrew Lococo. Both are important parts of Los Angeles and American history that we felt should be remembered. Read more info about this site in our Welcome post.

Sources used in this History text include official government documents, published newspaper articles, LA Almanac, and public family statements. If you feel something is erroneous, please make us aware of your source material: friends@cockatooinn.com. This content may not be republished in whole or in part.

About this Site
This is an informational site honoring the memory of the famed Cockatoo Inn. It contains published history as well as personal memories. For context on what this might mean, please see the Taxonomy at the bottom of the Memories page. For entertainment purposes only. Thank you for visiting!