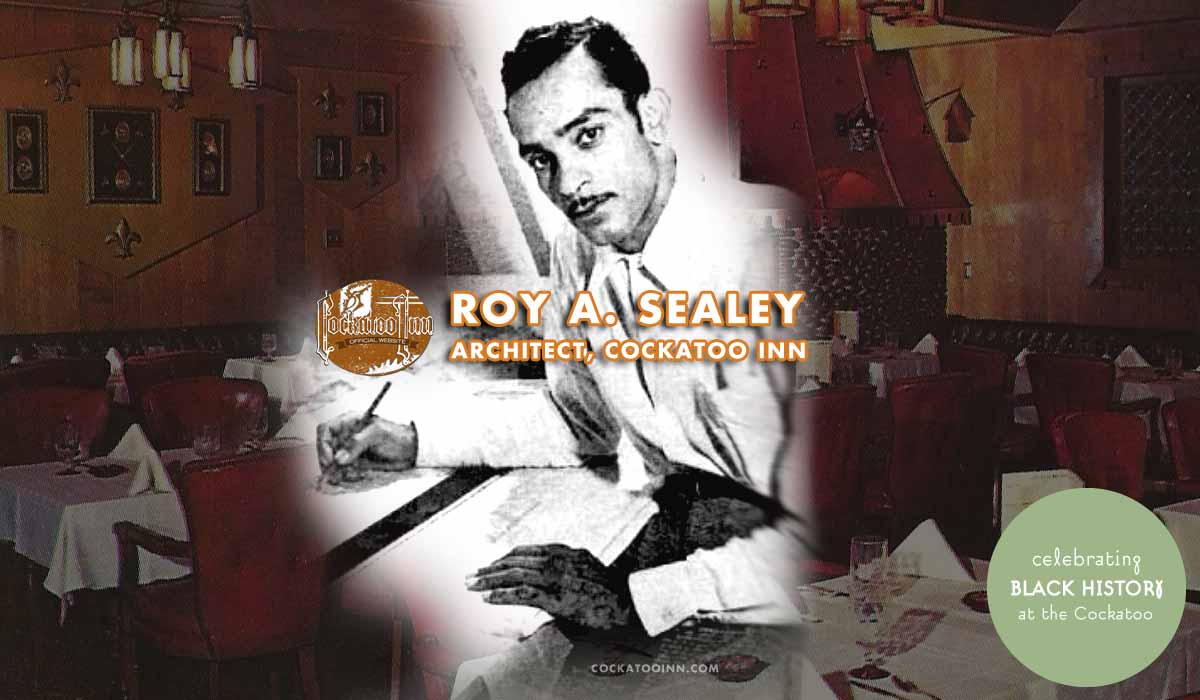 Andy Lococo and his prized hotel and restaurant are a big part of 20th century American history. However, this month we celebrate a somewhat forgotten figure whose important midcentury work still impact us today. Roy A. Sealey was born in 1917, one year prior to Andy Lococo’s birth. The prominent African-American architect played an integral role in creating spaces that facilitated community. He shined, whether he was tasked with making the LAC+USC Medical Center more functional, or taking on the monumental task of designing a potential World’s Fair site. Today, we look back at the life of Roy A. Sealey and his contributions to the Cockatoo Inn.

The early life of Roy A. Sealey

Roy Anthony Sealey was the second of four born to Dr. Samuel Joseph Sealey and Ethel Blanche McPherson in Panama, July 3, 1917. The family lived in Kingston, Jamaica for a while, before landing at Ellis Island in 1924. Roy later attended a military academy in Rock Castle, Virgina. As a young man, Roy lived in Bryan, Texas where his father established a medical practice. Roy Sealey enrolled at Prairie View Agricultural & Mechanical College to study architecture. His burgeoning talent caught the eye of the University of Southern California (USC), whose scholarship offer allowed Roy to attend in 1939.

That same year, Roy worked for one of the most famous and successful architects in LA, Paul Revere Williams. Some say this is where he cut his teeth as an architect, but he was already well on his way. In 1945, he told Williams he was leaving to start his own office. A worried Williams offered to make it a “leave of absence” in case Roy’s new venture didn’t work out. Fortunately, that never happened. Sealey was profiled in Ebony Magazine as the ”Architect for the Wealthy,” completing $3,000,000 worth of offices, cocktail lounges, homes and apartments in just five years. According to the profile, most of them were for business people and movie stars.

In 1957, Roy obtained his architect’s license. He worked out of his Beverly Boulevard office in the mid-Wilshire area of Los Angeles.

In 1963, he was chosen to design the SeaPort Marina Hotel (originally called Edgewater Inn) in Long Beach. It was a multi-million dollar project that looked to bolster Long Beach’s profile. Many hoped it would host the 1967 World’s Fair. However, the hotel was doomed after the City of Long Beach dropped out of consideration as a site. According to the Long Beach Post, the tax incentives vanished, and decreased tourism buried its chance of success. The SeaPort Marina Hotel was one of the rare examples of Googie-style design. Despite attempts to preserve it as an architecturally and culturally significant site, the building was demolished in October 2017.

Contribution to the Cockatoo Inn

Previously, we posted that Robert Mavis Designs, Inc. handled the new design of the Cockatoo after a fire in 1959 (Source: LA Times). With regard to Roy Sealey’s contribution, records are sparse as to whether it was part an expansion or a redesign. According to bibliographer, H. Watkins, Roy Sealey designed the Cockatoo Hotel Restaurant, as well as the parking garage, in 1968. That would be during Andy Lococo’s proprietorship, so we’d imagine the two collaborated closely. The entire place, Sealey’s contribution included, was demolished in 2005.

With the demolition of the SeaPort Marina Hotel and Cockatoo Inn, the work of Roy Sealey continues to fade from our landscape. Watkins and other sources have previously compiled some of Roy A. Sealey’s other notable projects (not an exhaustive list):

Architects don’t always get notoriety, despite their critical roles in shaping our physical environment. Roy Sealey was an important figure in Southern California architecture. In 1975, he was admitted to the American Institute of Architects. Throughout his stellar career, he also served as a consulting architect to other designers, and was lauded for his professionalism and clear and accurate drawings. According to this online obituary, he passed away in 2008 at the age of 90. He lived in Fullerton, California.

Did you ever stay at the SeaPort Marina Hotel in Long Beach or the Cockatoo Inn? Let us know in the comments or email us your memory at friends@cockatooinn.com.