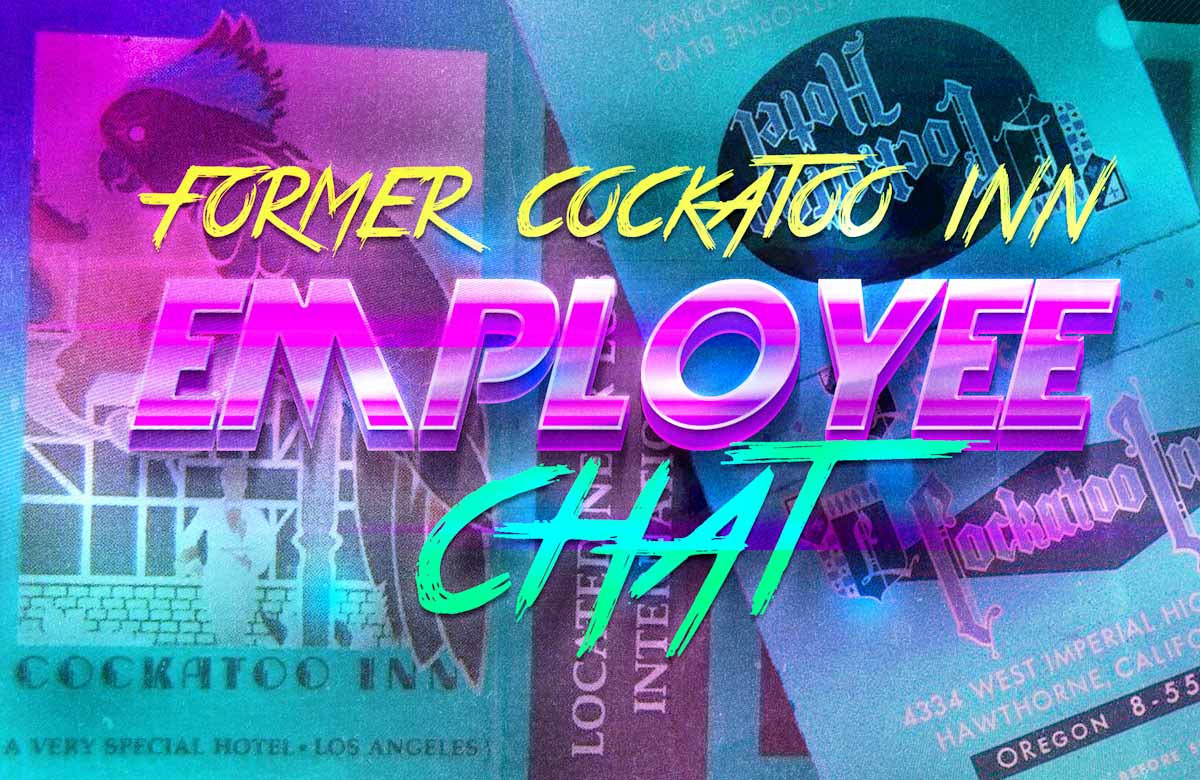 We are not overly active on social media, but our Cockatoo Inn Instagram allowed us to connect with Mary McPadden-Bigda. She was very nice and reminisced about her time working at the Cockatoo in the late ’80s and early ’90s. She was gracious enough to answer some questions about her tenure, her experience with Stan Sharma, and living in the old Lococo residence. Little did we know we were chatting with the former Director of Purchasing for the Cockatoo Inn!

Where are you from originally?

Mary: I was born in Boston, but grew up in Huntsville, AL.  My father worked for CSC, (Computer Sciences Corp.) – had a PhD and oversaw mergers & acquisitions around the world.

How did you come to work at the Cockatoo Inn?

Mary: Had to be an ad in the local newspaper.

Was it your first job?

Mary: Oh no, but it was my first endeavor into the hospitality industry.

Who was the owner of the Cockatoo at the time?

Who were the Sharmas? Or how did you meet them (him)?

Mary: The Sharmas were a family of eight: the parents, three boys, and three girls. Migrated to the U.S. in 1964 I believe. I met Stan and Devan when I worked at the hotel.

I dated Stan Sharma for a while. He had been previously seeing one of his dysfunctional “clinic patients” that had mental issues, and after she broke into his Bel Air home and took my Louis Vuitton luggage, I was pretty much done.

What was your job like (title, description, duties, etc.)?

Mary: I was at the front desk for about a week. Stan called me from “the Villa” (the Lococo former home), and offered me a promotion working as an Assistant Catering Manager for Gary. I accepted. After a couple of years doing that Stan then offered me a position working for Bashir (Controller). I accepted. Some time later, a position opened up to be the Director of Purchasing and I accepted that.

How long did you work there?

Did you see any persons of note while you worked there?

Mary: Yes, Willie Shoemaker came in for dinner on occasion. Of course, Charlie Whittingham and Gary Stevens, Laffit Pincay, William Bell, (California State Vet). The jockeys, trainers, and Hollywood Park followers were mostly only around during racing season there.

Why did you eventually leave the Cockatoo?

Mary: I knew there were major financial issues going on. Many alcohol distributors were C.O.D. only. Stan started sending me to Price Club to buy booze for the bars. It was illegal and beyond crazy!

I understand you also knew some of the Lococos?

Mary: I knew Frank Lococo. He was older then and might have been the brother of Andy. Not sure.

Was it true you lived in one of the Cockatoo’s on-site houses?

Mary: Yes, Stan had homes and apartment complexes in addition to the Cockatoo & Trade Winds Motel. I lived on-site on Birch Avenue behind the property, and the home was completely remodeled prior to my living there. Devan Sharma (brother), moved out and Stan leased it to me for $800/mo.

What did you enjoy most about working at the Cockatoo?

Thanks for taking the time to speak to us!

Wow, we just love hearing about the history of Cockatoo – all its personal stories and the people connected to it. It only happens through our readers and the people who send in their stories. We can’t thank Mary enough for sharing her memories!

Were you or someone you knew a former Cockatoo employee? We want to hear from you! Send us your memories at friends@cockatooinn.com!

Thanks to so many who have picked up the official Cockatoo Inn t-shirt!